The packages from Joseph Candoloro intercepted by participants for Operation Slipknot turned out to be Joker-associated, since these participants received a text message on their new phones from humanresources@whysoserious.com:

This lead to Whysoserious.com/Itsallpartoftheplan, the starting point for a game that commenced on April 28.

The countdown site features Jokerized portraits of numerous political figures on a wall, with a Joker card run through with a red knife near the top. 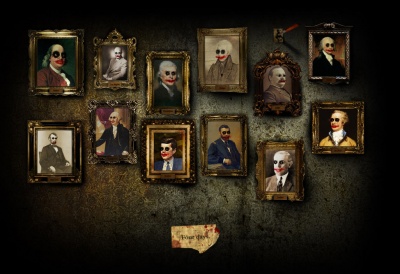 Each of the portrait frames are labeled with a city. All of the people were/are also featured on US currency. 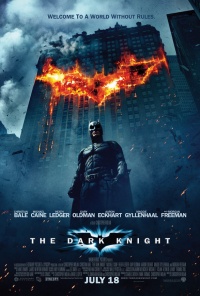 The portraits are updated with instructions to meet at certain coordinates, linked to Google Maps, in each city at a specific time (counted down) on Monday, April 28, similar to the Whysoserious.com/ComicCon scavenger hunt game.

The emphasis on "TRAIL" and "ER" implied that the reward for this game would be the next Dark Knight theatrical trailer.

The locations are as follows (times are approximate and grouped by simultaneous times, but they will be no earlier than the times listed):

As each city's countdown reached zero, their respective portrait link was updated with instructions for online "Oracles" to give to their partners on the ground, who would then give them numerical answers requested in the clues.

30 minutes into the game, the portrait could be clicked to reveal a hidden safe requiring a 6-digit combination to open.

The combinations are as follows:

Using the answers collected by the players on the ground, the "Oracles" were able to open the safe, revealing a note from the Joker for the on-site players:

The players on the ground were sent to a final location described in their city's safe note to receive a Joker card and a raffle ticket. They were then led into a theater and were given a private showing of a new theatrical trailer for The Dark Knight. One participant in each city was randomly chosen in a raffle to receive a film reel. Photographs of the London reel reveal that the content is a vandalized version of the trailer, the edits seemingly done by the Joker himself.

Two screenings of the Philadelphia reel projection can be downloaded from Megaupload here and here.

UPDATE: The Jokerized trailer reel can be viewed on The Dark Knight Blu-ray as an easter egg. Enter the numbers 56537 while playing Trailer #3 on disc 2. 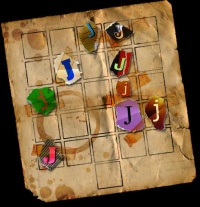 San Fransisco's safe reveals another note, which proved to be a clue. The grid represents the 26 letters of the alphabet, running left to right. Each J corresponds to a letter. These were then matched up to the J's in each city's safe notes, showing which letters are repeated (ex: Kansas City and San Francisco = 2 I's). When unscrambled, the letters reveal "sittingducks."