Ccfabg.org is the website of Concerned Citizens for A Better Gotham, an anti-Harvey Dent group. It was found on March 30, 2008, when Harvey Dent called his supporters asking for help counteracting the rumors started by a "group of malevolent individuals."

The page contains an attack ad where GPD officers accuse Dent of getting innocent officers arrested to gain media publicity. (The .swf file of the attack ad can be downloaded from Zshare here.)

The site contains a field to register for the CCFABG email mailing list. Registrants recieve the following email:

Police officers shown in the ad

Arrest warrants were later filed for these officers as part of "Operation Slipknot".

Defaced Harvey Dent pins with a sticker on the back reading "WWW.CCFABG.COM" are sent via an unmarked padded envelope through the mail. The left side of Harvey Dent's face on the front of the pin is burned or defaced by what looks like acid, a reference to Two-Face.

The .swf file of the new ad can be downloaded from Zshare here.

Located in the page's source code, underneath the latest entry is the commented out note:

Later, participants registered with Ibelieveinharveydent.com received a call that turned out to be a push-poll attacking Dent. (The poll can be heard by calling 1-877-777-6197.) Typing in 1-6-4-9-3-8 as your answers during the call results in the following secret message being played. A .mp3 recording can be downloaded from Zshare here.

As Operation Slipknot threatened the escape of the officers, a new message was added to the source code:

(The "gih" refers to the Gotham Intercontinental Hotel, where the officers were staying before their departure.) 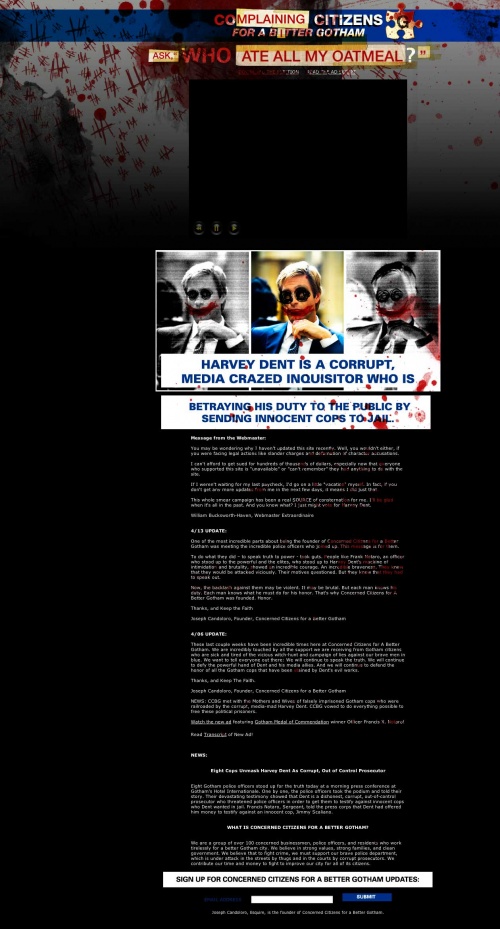